Stolon is composed of 3 main components 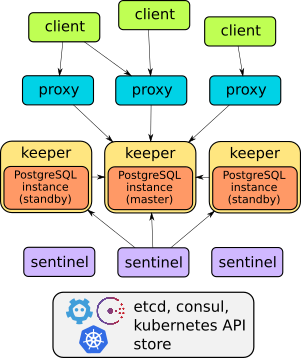 Stolon is available in brew. It is unofficial and not supported by the project.
So check the version before installing using brew.

Stolon is under active development and used in different environments. Probably its on disk format (store hierarchy and key contents) will change in future to support new features. If a breaking change is needed it'll be documented in the release notes and an upgrade path will be provided.

Anyway it's quite easy to reset a cluster from scratch keeping the current master instance working and without losing any data.

To build stolon we usually test and support the latest two major versions of Go like in the Go release policy.

Stolon tries to be resilient to any partitioning problem. The cluster view is computed by the leader sentinel and is useful to avoid data loss (one example over all avoid that old dead masters coming back are elected as the new master).

There can be tons of different partitioning cases. The primary ones are covered (and in future more will be added) by various integration tests