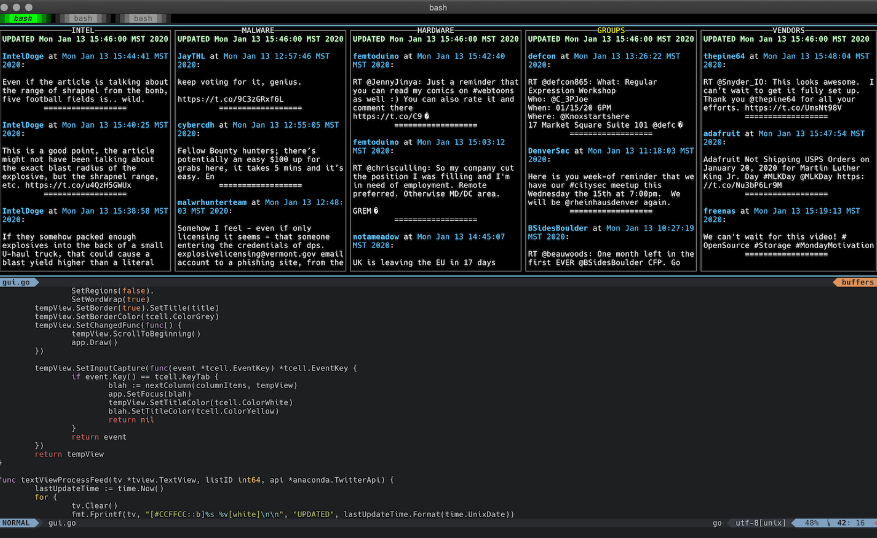 I follow a bunch of people who span a bunch of topics and wanted a way to keep track of all the cool stuff they post. I figured there would certainly be a read-only type tool to just stream tweets for you to view. I wasn't able to find anything which is why I created this.

Tweetdeck was the first thing I went to, but it was kind of clunky and I couldn't get over the set column width thing. Maybe I'm just dumb, but it didn't feel right to me. The fact that you needed to run it in a web browseer was also not ideal.

For that reason I hacked this thing together. It gives me the ability to watch tweets stream by in my terminal while I'm working. Think of it like a monitoring dashboard or something, only for tweets :).

The app leans heavily on Twitter "lists". Each list should be a grouping of similar topics, say "sports" or "world news" or whatever. In the app, each list will have a dedicated column which will only display tweets from members of that list. I use private lists as a way to organize who I follow, but the list doesn't have to be private for things to work.

Before you begin, you'll need a twitter dev account as you'll need to be able to interact with the twitter API. Once you have that, you
can populate the config file with your access token(s).

To install, you can either download a compiled executable from the releases page, or, if you have go installed, do your typical go get:

NOTE: sqlite is used for storage and the sqlite library I use depends on cgo. sqlite is only needed when starting with no lists.

Cod is a completion daemon for {bash,zsh}.

Go Binaries is an on-demand binary server, allowing non-Go users to quickly install tools written in Go without installing go itself, and removing the burden of cross-compiling and uploading dozens of binaries for every command-line you write.

Pure Go implementation of BLAKE3 with AVX2 and SSE4.1 acceleration.

This is a Golang port of simdjson, a high performance JSON parser developed by Daniel Lemire and Geoff Langdale.