Kong is a cloud-native, fast, scalable, and distributed Microservice Abstraction Layer (also known as an API Gateway, API Middleware or in some cases Service Mesh). Made available as an open-source project in 2015, its core values are high performance and extensibility.

Actively maintained, Kong is widely used in production at companies ranging from startups to Global 5000 as well as government organizations.

If you are building for the web, mobile, or IoT (Internet of Things) you will
likely end up needing common functionality to run your actual software. Kong
can help by acting as a gateway (or a sidecar) for microservices requests while
providing load balancing, logging, authentication, rate-limiting,
transformations, and more through plugins. 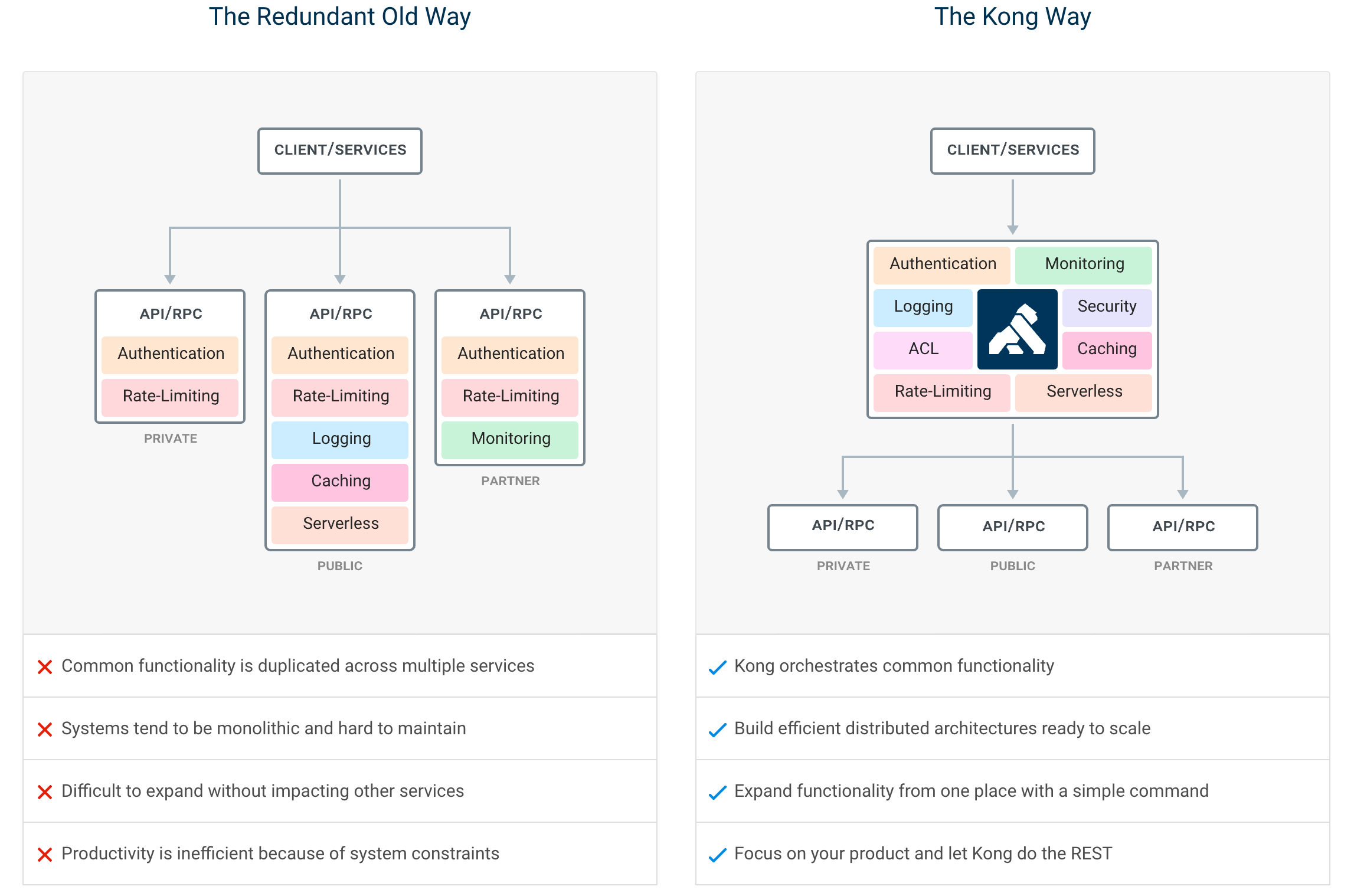 For more info about plugins and integrations, you can check out the Kong
Hub.

If you are planning on developing on Kong, you'll need a development
installation. The next branch holds the latest unreleased source code.

You can use Docker / docker-compose and a mounted volume to develop Kong by
following the instructions on Kong/kong-build-tools.

You can use a Vagrant box running Kong and Postgres that you can find at
Kong/kong-vagrant.

Kong mostly is an OpenResty application made of Lua source files, but also
requires some additional third-party dependencies. We recommend installing
those by following the source install instructions at
https://docs.konghq.com/install/source/.

Instead of following the second step (Install Kong), clone this repository
and install the latest Lua sources instead of the currently released ones:

Modifying the lua_package_path
and lua_package_cpath
directives will allow Kong to find your custom plugin's source code wherever it
might be in your system.

The first can simply be run after installing busted and running:

However, the integration and plugins tests will spawn a Kong instance and
perform their tests against it. As so, consult/edit the spec/kong_tests.conf
configuration file to make your test instance point to your Postgres/Cassandra
servers, depending on your needs.

You can run the integration tests (assuming both Postgres and Cassandra are
running and configured according to spec/kong_tests.conf) with:

And the plugins tests with:

Finally, all suites can be run at once by simply using:

Consult the run_tests.sh script for a more advanced example
usage of the tests suites and the Makefile.

Finally, a very useful tool in Lua development (as with many other dynamic
languages) is performing static linting of your code. You can use luacheck for this:

When developing, you can use the Makefile for doing the following operations:

If you are working in a large organization you should learn more about Kong
Enterprise.