Bidbot is a Filecoin Network sidecar for miners to bid in storage deal auctions.

Join us on our public Slack channel for news, discussions, and status updates. Check out our blog for the latest posts and announcements.

What is the Storage Broker?

First, we must understand that bidbot is a piece that’s part of a bigger picture: the storage broker. The storage broker (SB) is a system that receives data from multiple clients, aggregates them, and makes it available for miners to store. The SB has several unique properties that make it different than your typical Filecoin client.

Currently the storage-broker is creating a slow stream of auctions, so you might see nothing happening when running bidbot. This is expected for some time, so unless you see errors in your logs you can leave the daemon running.

Whenever the SB has aggregates a minimum threshold of data, it attempts to make deals with miners. Data payloads awaiting storage is described by the usual attributes you’re familiar with in Filecoin:

To initiate the storage of the new payload, the SB creates an auction. The auction is published to all connected miners to notify them that a new payload is awaiting storage on Filecoin.

To understand better what this is about, consider the following chat:

Miners will send bids to show their interest in participating in the auction. Bids provide the SB multiple pieces of information (i.e. price, start epoch, etc) about the miner’s storage intent. Unlike the chat based auction, miners connected to the SB can configure bidding to happen automatically as fast as the miner’s infrastructure can handle.

The SB collects all bids from connected miners and chooses one or multiple winners. The winning algorithm is still under development, but you can expect that the following facts will help winning an auction:

If you win an auction, you will be notified about it! If that weren’t the case, you will see the declared winner published on the auction feed and most probably you’ll have better luck in the next auction!

The SB relies on offline deals to make deals with miners. After you win an auction, you will pull the deal data from the SB’s IPFS nodes. You can think of this flow as an automatic offline deal setup where instead of receiving hard drives, you’ll pull the data from someplace and then receive the offline-deal proposal.

How do I connect with the system?

The hypothetical scenario in the previous section obviously didn’t explain how you would really send bids or interact with the SB. The following diagram will help to get a better picture: 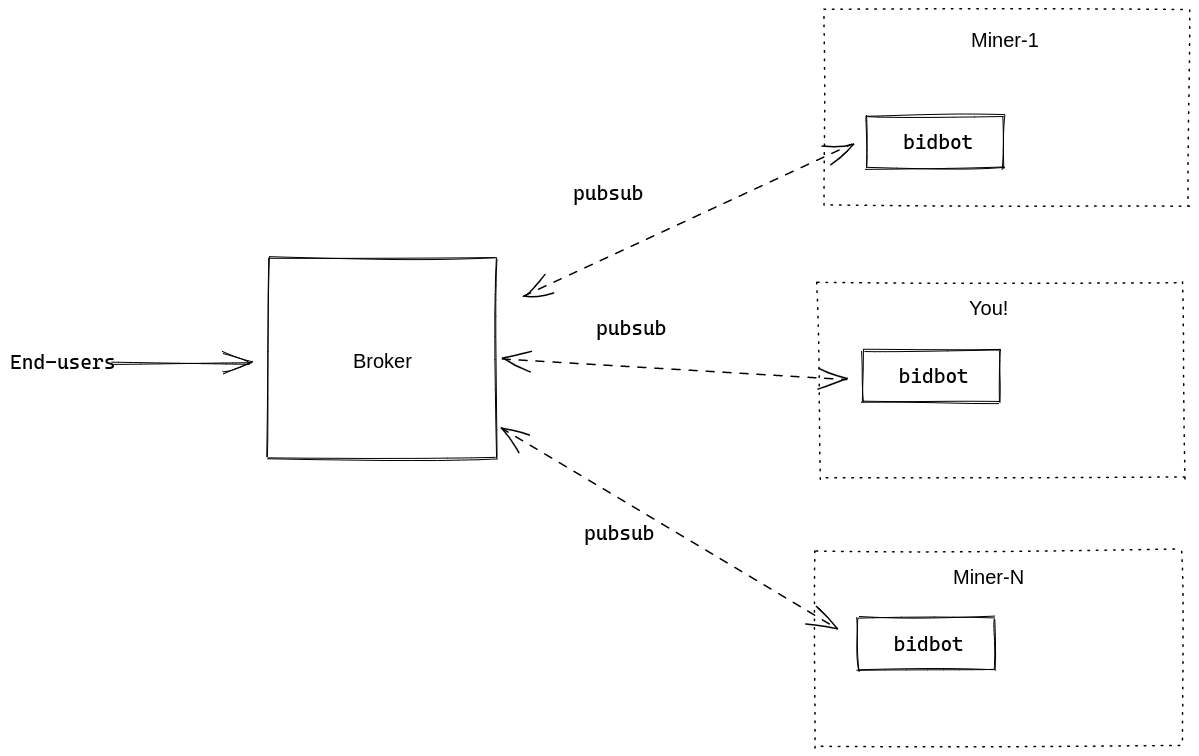 To connect to the system, you will install bidbot, a daemon that you run on your infrastructure.

The bidbot talks to the SB through libp2p pubsub topics. This is the same technology used by many libp2p applications such as lotus. Through these topics, your bidbot daemon will receive new auctions and can send bids to participate.

Whenever you win an auction, your lotus-miner will receive the deal proposal for the corresponding data so you can accept it, and a ProposalCid is generated. After acceptance, your bidbot will automatically download the PayloadCid data from the SB’s IPFS nodes, and import it as you generally do with offline deals, simulating the following commands you might be aware of: lotus-miner storage-deals import-data <dealCid> <carFilePath>

The carFilePath is the CAR file that bidbot generated after downloading the deals data from the SB. The dealCid is the ProposalCid of the proposal you previously accepted from the SB.

There’s nothing more to do than the usual flow of deal execution steps from that moment forward. What’s important is that the deal becomes active on-chain before the StartDealEpoch you promised in your bid!

How do I run bidbot?

Here’re the steps to do it:

How does this fit in my current miner infrastructure?

The following diagram shows how bidbot, SB, and your lotus-miner interact:

Note: you can install bidbot on the same host as your miner daemon, but there’s a reasonable chance that you might want to avoid that for security reasons.

OK, I’ve it running, what I should see?

First, congratulation on being connected! When starting your bidbot daemon, you should see the following lines appearing in your console:

It’s important to check that you see the last line (“subscribed to the deal auction feed”) in your log output. This means you’re connected to the SB successfully.

After some time, you’ll see some activity in the log output, such as:

You’ll also see bids that are proposed in the auction:

If you win an auction, you should see a log line similar to:

If you have bidbot daemon running, we recommend you explore the following available commands:

Do you think bidbot can have other commands that would make your life easier? We’re interested in knowing about that!

This repository falls under the Textile Code of Conduct.

Feel free to get in touch by:

A changelog is published along with each release.

A tool to test and analyze storage and retrieval deal capability on the Filecoin network
05 December 2021
Storj : building a decentralized cloud storage network
04 December 2021
An implementation of the Filecoin Distributed Storage Network
28 October 2021