Tixcash (TXH) is a sustainable cryptocurrency modeled after Satoshi Nakamoto’s vision for Bitcoin. It is a decentralized, peer-to-peer transactional currency designed to offer a solution to the problem posed by the exponential increase in energy consumed by Bitcoin and other proof-of-work currencies. Proof-of-work mining is environmentally unsustainable due to the electricity used by high-powered mining hardware.

Tixcash utilizes an energy efficient proof-of-stake algorithm, can be mined on any computer or server, and will never require specialized mining equipment. The Green Protocol offers a simple solution to Bitcoin sustainability issues and provides a faster, more scalable blockchain that is better suited for daily transactional use.

Tixcash is based on the latest 3 generation blockchain technology, and its fast transaction features guaranteed instant confirmation transactions. Decentralized blockchain voting providing for consensus based advancement of the current technology used to secure the network and provide the above features, each full node is secured. and the smart contract pledge mining method will be used to obtain income; the international common floating pledge mining mode is being adopted.

With the advanced EVM model, the Tixcash chain will run in a more sustanable and more efficient way, since the EVM technology, adopted by ETH and more 3rd generation coins, provides a system with lower gas fee and better transaction efficiency.

Furthermore, the standard hash system ensures compatibility when it comes to interactions with other mainstream coins.

The distribution plan of a total of 100 billion Tixcash coins will be announced worldwide in the near future. The distribution method will include node mining rewards10%, pledge rewards50%, foundations13%, team holdings10%, community development and ecological construction funds15%, pre-mined2%,etc. 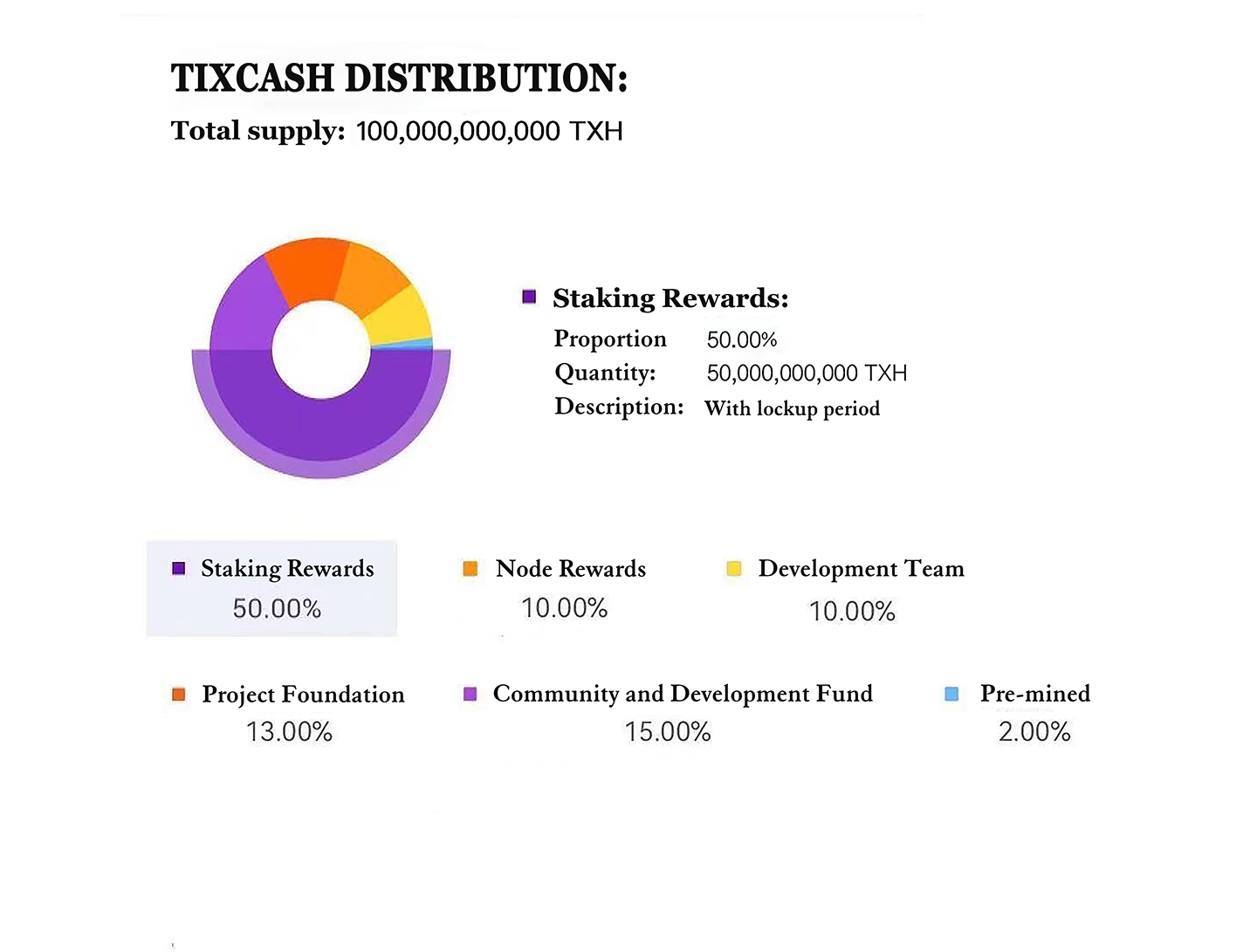 Building opera requires both a Go (version 1.14 or later) and a C compiler. You can install them using your favourite package manager. Once the dependencies are installed, run

Going through all the possible command line flags is out of scope here, but we’ve enumerated a few common parameter combos to get you up to speed quickly on how you can run your own opera instance.

As an alternative to passing the numerous flags to the opera binary, you can also pass a configuration file via:

To get an idea how the file should look like you can use the dumpconfig subcommand to export your existing configuration:

To launch a validator, you have to use --validator.id and --validator.pubkey flags to enable events emitter.

opera will prompt you for a password to decrypt your validator private key. Optionally, you can specify password with a file using --validator.password flag.

Optionally you can specify your public IP to straighten connectivity of the network. Ensure your TCP/UDP p2p port (5050 by default) isn’t blocked by your firewall.

It may be convenient to use a separate datadir for your testnet node to avoid collisions with other networks:

Fakenet is a private network optimized for your private testing. It’ll generate a genesis containing N validators with equal stakes. To launch a validator in this network, all you need to do is specify a validator ID you’re willing to launch.

Pay attention that validator’s private keys are deterministically generated in this network, so you must use it only for private testing.

Maintaining your own private network is more involved as a lot of configurations taken for granted in the official networks need to be manually set up.

To run the fakenet with just one validator (which will work practically as a PoA blockchain), use:

To run the fakenet with 5 validators, run the command for each validator:

If you have to launch a non-validator node in fakenet, use 0 as ID:

After that, you have to connect your nodes. Either connect them statically or specify a bootnode: