golicense is a tool that scans compiled Go binaries and can output all the dependencies, their versions, and their respective licenses (if known). golicense only works with Go binaries compiled using Go modules for dependency management.

golicense determines the dependency list quickly and with exact accuracy since it uses metadata from the Go compiler to determine the exact set of dependencies embedded in a compiled Go binary. This excludes dependencies that are not used in the final binary. For example, if a library depends on “foo” in function “F” but “F” is never called, then the dependency “foo” will not be present in the final binary.

Warning: The binary itself must be trusted and untampered with to provide accurate results. It is trivial to modify the dependency information of a compiled binary. This is the opposite side of the same coin with source-based dependency analysis where the source must not be tampered.

The example below runs golicense against itself from a recent build.

To install golicense, download the appropriate release for your platform from the releases page.

You can also compile from source using Go 1.11 or later using standard go build. Please ensure that Go modules are enabled (GOPATH not set or GO111MODULE set to “on”).

golicense is used with one or two required arguments. In the one-argument form, the dependencies and their licenses are listed. In the two-argument form, a configuration file can be given to specify an allow/deny list of licenses and more.

You may also pass mutliple binaries (but only if you are providing a CONFIG).

golicense uses the GitHub API to look up licenses. This doesn’t require any authentication out of the box but will be severely rate limited. It is recommended that you generate a personal access token to increase the rate limit. The personal access token doesn’t require any special access unless it needs to look at private repositories you have access to, in which case it should be granted the repo permission. Specify your token using the GITHUB_TOKEN environment variable.

If the -out-xlsx flag is specified, then an Excel report is generated and written to the path specified in addition to the terminal output. 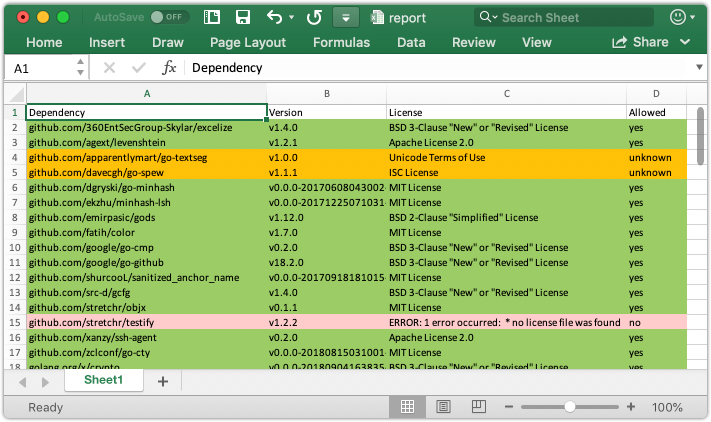 There are a number of limitations to golicense currently. These are fixable but work hasn’t been done to address these yet. If you feel like taking a stab at any of these, please do and contribute!

GitHub API: The license detected by golicense may be incorrect if a GitHub project changes licenses. golicense uses the GitHub API which only returns the license currently detected; we can’t lookup licenses for specific commit hashes.